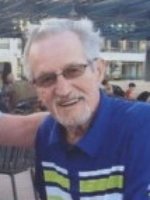 Belanger, Wilfrid Joseph ~ passed peacefully surrounded by his family, Thursday September 19th in his 82nd year. Beloved husband of Beverley Belanger. Loving and wonderful father of Wilfred Jr., Lise, Alain, Nicole, Ginette (Grandbois), son in law Mark Grandbois and step sons Jason, and Christopher McGill. Proud grandfather to sixteen grandchildren and many great grandchildren. Wilfrid will be greatly missed by his surviving brother Rocky (Kazia) and sister Joan (Nick), half siblings, Regen Belanger and Liz Smith as well as many nieces and nephews. He is predeceased by his parents Rosa and Joseph and siblings Roger, Majella (Mac), Herve (Harvey), Oneil, Doris and Anita. Wilfrid was born in Saint-Magloire, Quebec on February 5th, 1938. He was an avid bowler, golfer and had an immense passion for fishing on Balsam Lake. His yearly fishing trip with his friends eventually became a family tradition that will carry on for many years. As per Wilfrid's wishes, cremation has taken place and a private family interment will follow. If desired a donation may be made in Wilfrid's memory to the Heart and Stroke Foundation or the charity of your choice. You will be greatly missed Dad. XO