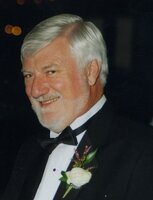 DICKSON, James Gilliland - Passed away suddenly on June 29, 2022 at the age of 76. Devoted husband of 27 years and best friend of Maureen Patterson. Cherished father of Heather (David) Mullen, and Tania (Brent) Flynn. Loving Papa of Meaghan, Ashley, Alexander James, Kiera, and Quinn. Predeceased by his brother William (Patricia). Cherished uncle of Gary, Jamie, and Greig. He will be dearly missed by many friends and extended family members in Canada and Scotland. He was a proud Mason and Shriner and loved his children and grandchildren dearly. As per his wishes, cremation has taken place and a private family ceremony will be held at a later date. In honour of James memory, donations may be made to the SickKids Foundation. Online condolences at www.pjdartefh.ca If its not Scottish its Crap!