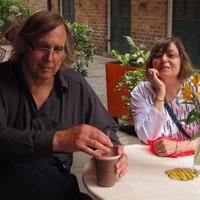 Frederick Caplan (1949-2022) passed away suddenly on the afternoon of June 25th, 2022. A pillar of the St. Catharines community, Frederick managed to get a law degree and maintain a successful legal practice without ever actually attaining a high school degree, much to the embarrassment of Sir Winston Churchill Secondary School. His undergraduate work at the University of Wisconsin-Madison in the late 1960s instilled in him a lifelong interest in leftist social justice as well as theoretical physics. His time in law school at the University of Windsor honed him into a finely-edged legal gladius, a comparison he would have thoroughly enjoyed given his strong interest in Roman history. He amused family, friends, and colleagues alike with his puns, which he considered a sophisticated form of wordplay. His family may have used another phrase to describe these puns, but that’s beside the point. In the wake of such a pun he would often take stock of the tepid response and claim that he deserved better. It is our contention, here at the end, that this was often true. A loving and generous man, he typically chose to express that love through gourmet cooking. His style was French with a hint of Italian, and his dinner table was often full, with the friends of his four children dropping by habitually to partake in the culinary delights turned out of his kitchen. An eminently practical and scientifically-minded man, he nonetheless maintained that cooking was an art and was famous for never using anything like a measurement while he practiced that art. He will be greatly missed by his sister Beverley, children Kimberley (Tanner), Benjamin (Ida), Mikki (Trevor) and Robyn (Adam), as well as his grandchildren Emma, Rylee, Xavier, Saydee, and Elliot, and a host of extended cousins, friends, colleagues, and clients. Predeceased by his wife Marion, his parents Harry and Mary Caplan, as well as his brothers Paul Caplan and Bruce Caplan. Donations in his honour, including children’s clothing with tags, can be made to McMaster Children’s Hospital Foundation, 40 Wellington St. N, P.O. Box 739 LCD 1, Hamilton, ON, L8R 3M8, or online at donations@hamiltonhealth.ca.